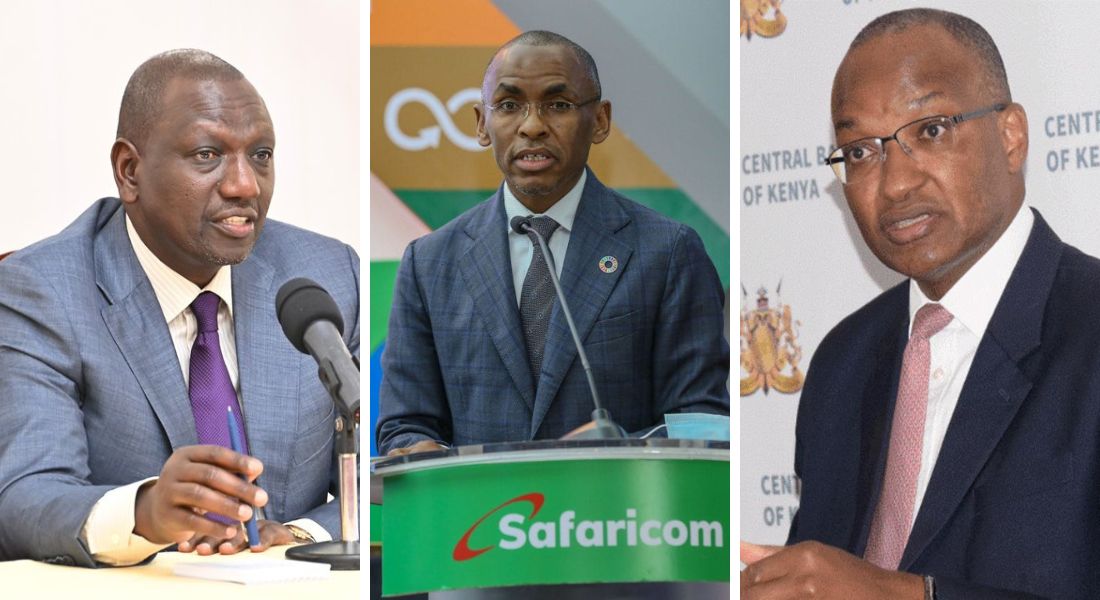 President William Ruto met major financial institution bosses in the country Wednesday, at Norfolk Hotel, Nairobi to chat a new path of lowering the cost of living among millions of Kenyans.

In his speech, the president thanked Safaricom Chief Executive Officer Peter Ndegwa for going out of his way to lower Fuliza loans at discounted rate.

“Kenyans can’t find their way to your offices, and they have chosen me to come and speak to you on thier behalf. I am confident that walking this journey in the direction you have taken – we will get to the correct destination,” said the President.

In the run up to the August 9 General Election, Fuliza was a common campaign tool for the President when he criss-crossed the country to whip millions of Kenyans to vote for him.

This as he promised to lower the cost of borrowing in an economy that is still reeling from the COVID-19 ravages.

“Today you have made a very positive step on Fuliza. I am happy that by beginning of November, about four million Kenyans will be out of the blacklisting,” added the President.

His speech came shortly after the Safaricom introduced a 40 percent discount on Fuliza loans effective October 1, 2022.

With a retained access fee of one percent for all facilities, loans of between Ksh.101 to Ksh.500 and Ksh.501 to Ksh.1,000 will now attract a fee of Ksh.3 and Ksh.6 respectively, from the respective prior charges of Ksh.5 and Ksh.10.

The new tariffs, according to the deal, will be for customers who would have cleared their outstanding loan.

The discounted rate was arrived at after the telco entered into a deal with the Kenya Commercial Bank (KCB) and NCBA on the back of public outcry over the high cost of credit in the country.

The president, however, challenged the Credit Reference Bureaus (CRBs) in the country to review their listing mechanism, which according to him, has locked out millions of Kenyans from accessing credit.

Even as he reiterated the importance of the CRBs in the country as a mechanism of instilling financial discipline in the financial sector.

Credit information sharing has centred conversations in the recent past, with reports indicating that close to 15 million Kenyans have been listed on CRBs.

In his piece published by Nation.Africa, Kenyan Bankers Association (KBA) Chief Executive Office Habil Olaka on September 25, opines that the mechanism is “meant to address information barriers between potential and actual borrowers in the economy.”

The President, on the other hand, thanked the Central Bank of Kenya (CBK) Governor Dr. Patrick Nkoroge for moving with speed to regulate the Digital credit Providers (DCP).

“I am happy that CBK has made a step to try and regulate mobile lenders in the country that have been operating in an opaque environment.”