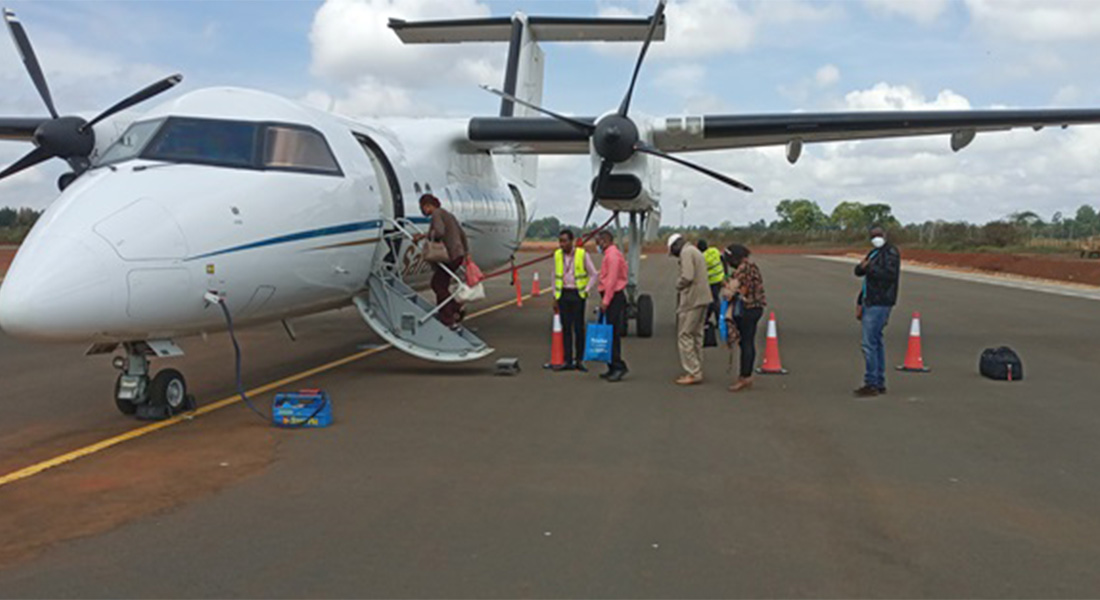 Transport and communications services between Kitale town and Nairobi have received a major boost following the resumption of flights operations between the two destinations by Safarilink.

The Kitale airstrip was shut down in 2020 to pave the way for the construction of a Runway Safety Area (RSA).

According to reports, Kenya Airport Authority (KAA) has spent Ksh.221 million on the construction of the 1.45 kilometre runway at the Kitale airstrip, which will be instrumental in the transportation of horticultural products.

Rehabilitation works involved the extension of the runway to accommodate code 2B Aircraft.

Speaking during the event, Kenya Airports Authority (KAA), Kitale Airstrip Manager Martin Juma, said the Kitale facility will now accommodate at least four planes with a capacity of 40 passengers each at any given time.

Juma said the airstrip, which has been under renovation for the last two years, will aid in decongesting the Eldoret International Airport.

“The Airstrip, which has a 1.45 kilometre strip, was given two new taxiways, making it to four in total,” said Juma, adding that this will allow for the movement of any aircraft in and away from the terminal building.

Rehabilitation at the facility was being done in two phases, Phase One being upgrading of the 1.45 km runway, while Second Phase involved the construction of an Administration Block that consists of a VIP lounge.

Due to the renovation works, domestic air travelers to the western region have had to use the Eldoret and Kisumu airports.

The County Commissioner noted that the airstrip was one of President Uhuru Kenyatta’s flagship projects in the region, which would go a long way in boosting flight connectivity within the County and the region at large.

Travelers will save up to one hour when flying directly between Kitale and Nairobi compared to using Kisumu or Eldoret airports.

The facility will enhance regional integration, improve access and connectivity between Kenya, Southern Sudan, the Democratic Republic of Congo (DRC) and Uganda as well as foster transport, communication and trade linkages within the four countries and beyond.