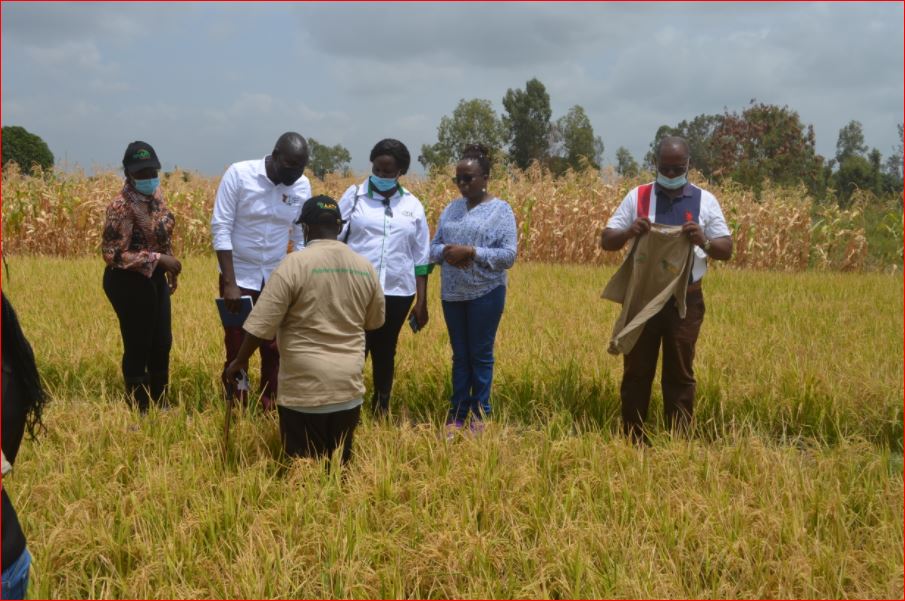 Rice farmers in Mwea have structured a solution to the recent high demand of imported rice through the newly identified Rice hybrid, which scientists describe as favorable to Kenyans and also cheaper than imported rice.

According to the Director in charge of programs and commercialization at the African Agriculture Technology Foundation (AATF) Dr.Okogbenin the government should support local farmers since the variety is more yielding and early maturing.

“It is heart breaking for Kenya and the entire Africa to continue importing food while they have the ability to produce their own at a local level”, said Okogbenin.

Okogbenin also revealed that they were in support of the big four agendas especially food security as he encouraged adoption of technology in Kenya and Africa in a bid to increase rice production, as he revealed that rice consumption in Kenya stands at 650,000 tons compared to local rice production that stands at 150,000 thus 500,000 is imported annually to fill the gap.

Further the renowned scientist said that increased rice production would increase job opportunities as consumption had increased by 13 percent and 3 percent for productivity.

“Adoption of hybrid rice will enhance income for farmers besides creating the much-desired job opportunities for Kenyan youths, “said the scientist.

Head of Rice promotion in the Ministry of Agriculture under the department of crop development Dr. Mary Mutembei revealed the government’s plan to increase local production which will be 1.3 metric tons by 2030 as Kenya embraces rice to feature as a common meal in households.

“We have managed to farm 20 percent of what is consumed locally across 24 counties. However, Mwea irrigation scheme is the mega producer”, stated Dr Mutembei.

She, however, urged farmers to embrace cultivation of hybrid seeds for the purpose of food security as she said the government would continue collaborating with seed developing agencies and both local and international crop experts to oversee improved of seeds so as to boost local production.

Dr Mutembei commended the new variety as it is not prone to floods and can withstand harsh weather conditions as well as retain aromatic trait, while she also showcased varieties like Kwomboka, PWAN gold, AH18007, AH18004 and SCH04.