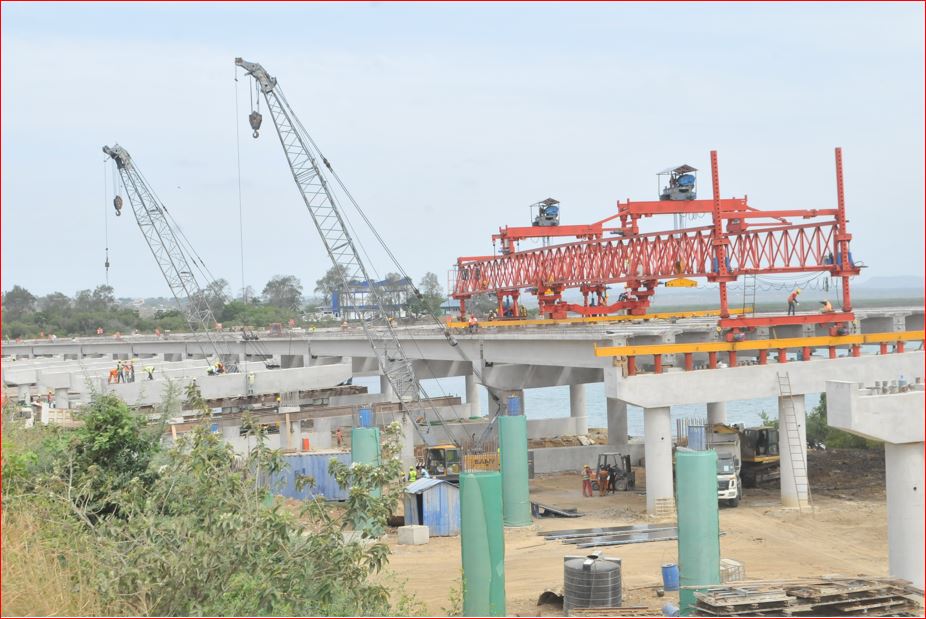 The Ksh.4.5 billion Makupa Bridge in Mombasa County is nearing completion ad will be released to the public in June this year.

The 457-meter bridge whose construction started in April 2021, will link Mombasa Island to the Mainland, replacing the current Makupa Causeway that was built in 1929.

The China Communications and Construction Company Limited (CCCC), is constructing the Bridge, with funding from the National Government.

An inspection exercise for the highway has been scheduled for March 3, 2022by Mombasa County Development Implementation Coordination Committee (MCDICC).

The Committee Chairman, who doubles up as Mombasa County Commissioner, Lukas Mwanza, said the Bridge is among several multi-billion infrastructural and other projects being undertaken by the National Government in the Coastal City.

According to Mwanza, the Bridge infrastructure will greatly be improved along the Mombasa-Nairobi Trunk Road and movement of cargo from the Port of Mombasa.

The Bridge comprises four-lane parallel bridges with width of 20 metres each and an extra two-metre rail for non-motorised traffic and a pedestrian footpath.

“The National Government has committed huge resources for key infrastructural and other projects to spur development in the Coastal City and the Coastal Region at large,” said Mwanza.

He said infrastructure improvements and other vital initiatives have helped to position the County as an attractive destination for investment, trade and tourism.

Mwanza said that Mombasa and other coastal counties were a beneficiary of multi –billion infrastructural and other mega projects meant to transform the region into an investment and tourism hub.

Among other projects that will change the fortunes of the region include the Mombasa-Kwa Jomvu road and Dongo Kundu Special Economic Zone (SEZ), which is expected to be a logistics and industrial hub in Mombasa and create thousands of jobs for Kenyans.

According to stakeholders in the shipping and logistic sector, the 39.1 billion shillings project will be able to create over 30,000 jobs.

The Dongo Kundu project which will connect Mombasa to the South Coast in Kwale County is also aimed at easing transport, boost industrial development and accelerate movement of cargo from Mombasa Port.

The County has also witnessed construction and improvement of roads such as Mombasa-Miritini Road, Airport and Port Reitz roads, which have been expanded into dual carriageways at a cost of Ksh.23 billion.