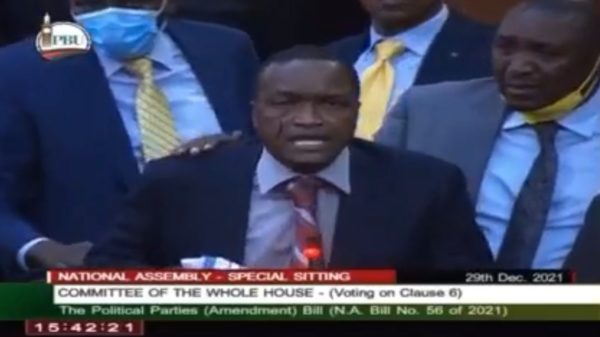 Members of Parliament staged quite a show in National Assembly over the controversial Political Parties (Amendment) Bill, 2021.

The lawmakers resorted to physical confrontation disrupting the voting, with bitter fist exchange, water bottle hurling among themselves.

Sigowet-Soin MP Kipsengeret Koros suffered a cut in the face during the gladiator show.

The Bill seeks to allow candidates to run on either coalition party tickets or individual parties, among other provisions, to promote peaceful coexistence among Kenyans.

Clause 6 which is at the Center of the Bill seeks to among others provide for procedure followed for the registration of a coalition political party.

Pundits claim the clause on coalition formation is part of a scheme by President Uhuru Kenyatta and his handshake partner ODM leader Raila Odinga to allow the registration of Azimio La Umoja Movement as a coalition and clear the way for it to field candidates in 2022.