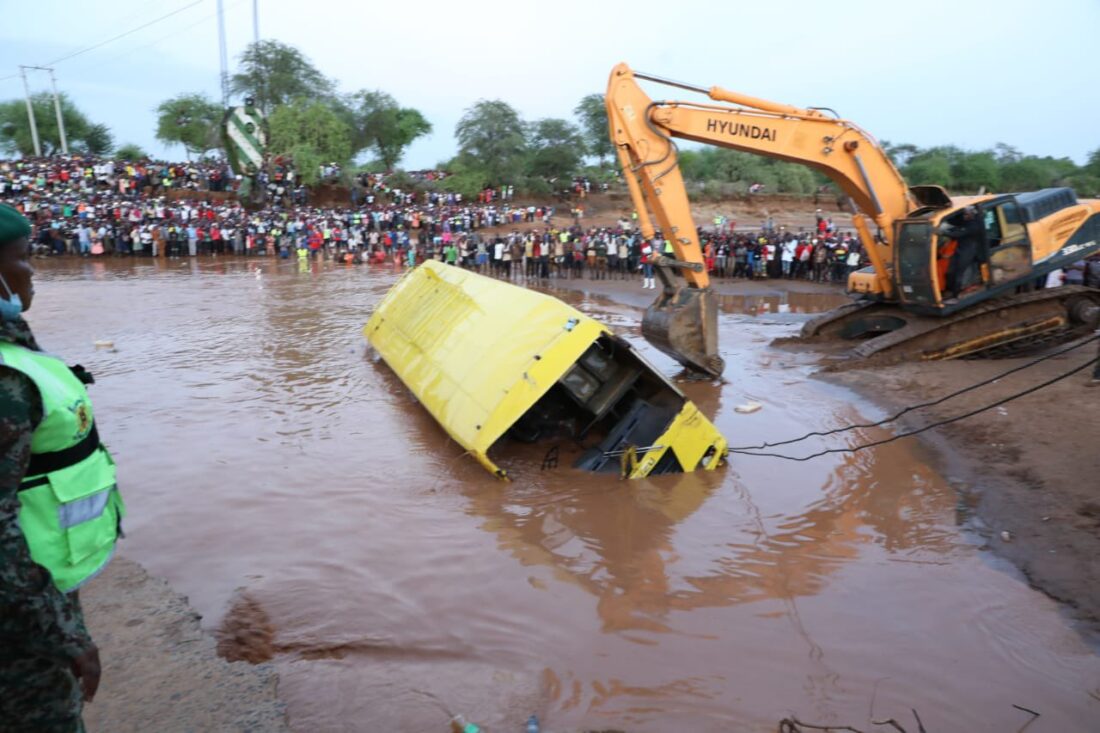 More details have now emerged about the Saturday tragedy which left 31 people dead after a bus drowned in River Enziu.

A survivor named Joyous Mutua lost 15 members of his family, including his mother, sisters, anties in a bus which carried an excess of the required capacity.

Mutua, aged 23, was forced to break bus windows, and luckily, managed to save the lives of his two cousins.

“We were traveling to attend my grandparents’ wedding and I have lost 15 relatives following the tragedy,” said Mutua, who spoke to the Star.

According to Mutua, his family could still be alive today if the national government had played its part.

He said the bridge which was overflowed with water had stalled for seven years.

“If only this stalled bridge that has been here for seven years was completed, we would not have lost our loved ones,” he said.

The yellow bus belonging to St Joseph Seminary had carried to capacity and had more than 15 extra passengers standing in the aisle.

Another survivor, Christopher Musili also recounted how he cheated death on Saturday.

According to Musili, women pushed the driver to cross the bridge when they saw a lorry successfully cross it. He says men were calm and composed but women kept shouting.

“I became very fearful as the driver started going. I feared we would be submerged,” he said.

He opened his eyes in intervals and swum to the direction of shouts of rescuers and where the light was coming from, hoping he would be saved.

But for lucky Musili, local divers and well-wishers were right on spot to help him.

“I felt like I was in a swimming pool and I used a window which was open to getting out. I closed my eyes and would hold my breath for about 20 to 30 seconds repeatedly. I took in the water four times to help not run out of oxygen,” Musili recounted the ordeal.

While confirming the incident, the Mwingi East Sub County Police Commander Joseph Yakan said the driver of the bus lost control and slid into the river.

“This is a river and it was flooding. The driver lost control and slid into a ditch. The bus capsized next to the bridge. The driver has also died. The bus was leaving Mwingi Central towards Nuu in Mwingi East,” Yakan said.

Rescue efforts are still ongoing to retrieve the remaining bodies which are still stuck in the belly of the river. The operation had to be called off for a later period due to heavy rains that have been pounding the region.

Warrant of arrest is