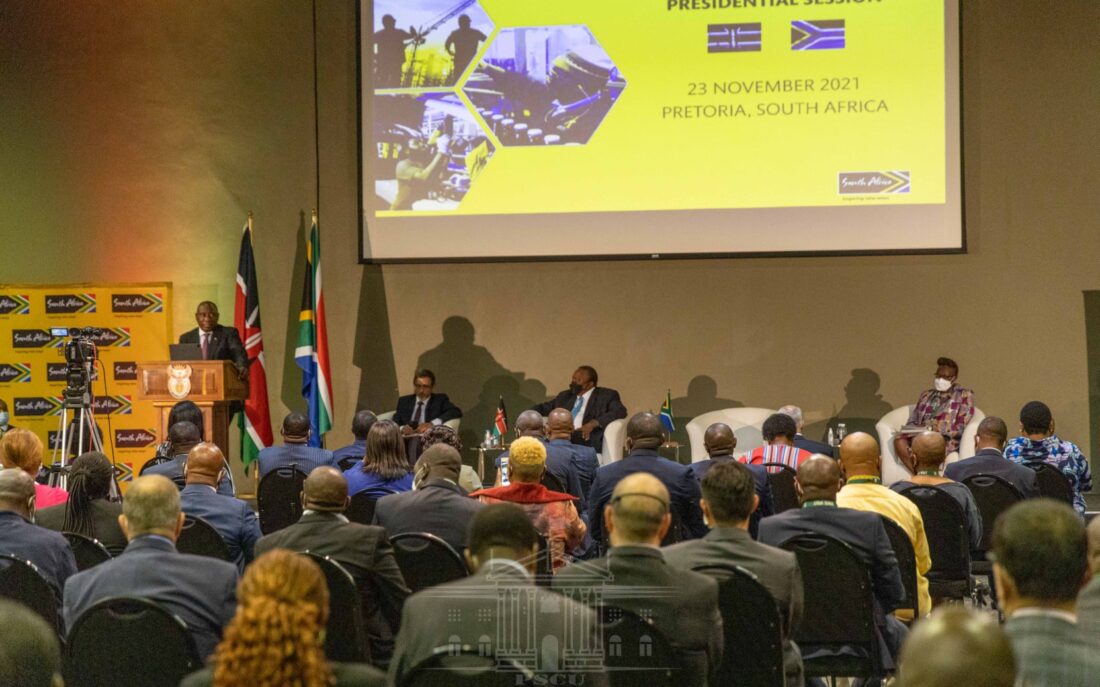 President Uhuru Kenyatta has urged Kenyan and  South African business communities to leverage on trade and investments as enablers of strengthening bilateral ties between the two African nations.

The President said the business communities should not view themselves as competitors but partners working together to meet the demands for goods and services in Kenya and South Africa.

“You are not competitors. I think the big mistake we had made is by making each other competitors. We are not competing. We are here to satisfy the needs of our respective markets. Our problem is that we are not working together to meet the demands that our people have,” President Kenyatta said.

President Kenyatta spoke on Tuesday when he and his host President Cyril Ramaphosa addressed a Kenya-South Africa business forum that was attended by over 250 business leaders from the two countries.

At the same time, the two Heads of State directed their respective trade ministers to swiftly work towards resolving non-tariff barriers and other constraints that constrict trade between Kenya and South Africa.

Noting that trade between the two countries is hugely skewed in favour of South Africa, Presidents Kenyatta and Ramaphosa tasked their technical teams to come up with measures to address the trade imbalance.

President Kenyatta said the technical teams should review the range of goods and services that South Africa imports from the rest of the world; and identify those that the country could source from Kenya and vice versa.

“I am sure you all agree with me, Kenya has a comparative advantage in the service sector, particularly in hospitality, financial services, ICT and data processing,” President Kenyatta said.

The Kenyan leader challenged the business people from the two countries to work together not to just increase the volume of trade and investment but also to raise its quality and broaden its scope, saying this will create jobs for the youth by spurring faster economic growth.

“This includes exploring options for establishing a favoured status for youth and Small and Medium Enterprises in trade, driving digital trade, and harnessing opportunities created by the climate change agenda to scale up green investments,” President Kenyatta said.

He pointed out that given the strategic importance of South Africa and Kenya on the continent, addressing the bottlenecks in the trade and investment regime between the two countries would be an important building bloc towards harnessing the benefits of the African Continental Free Trade Area (AfCTFA).

“I encourage you to use this meeting to identify which of the solutions that we are proposing at the bilateral level can be applied more broadly across the continent to unlock the dream of the AfCFTA,” President Kenyatta told the business people.

On his part, President Ramaphosa noted that although Kenya is South Africa’s largest trading partner in Africa outside the Southern African Development Community, a lot needed to be done to address the trade imbalance that is tilted in favour of South Africa.

He also pointed out that South Africa could be the strategic partner that Kenya needs in implementing its Big 4 Agenda which focuses on manufacturing, food security, universal health coverage and affordable housing.

“For this to happen, our trade relationship needs to involve greater value addition with more focus on manufactured and agricultural goods.

“We need to take greater steps to achieve greater balance in our bilateral trade which is currently skewed in favour of South Africa,” President Ramaphosa said, singling out the importation of tea and coffee from Kenya as the products that could be considered first.

On COVID-19, Presidents Kenyatta and Ramaphosa said the pandemic has demonstrated that given the right political and institutional support, the private sector can complement the public sector in creating the needed capacity and innovation not just to conquer the virus but also to catalyse strong and resilient recovery.

During the forum, a strategic framework agreement that provides a roadmap for the creation of a pan-Africa airline group was signed between South African Airways and Kenya Airways.