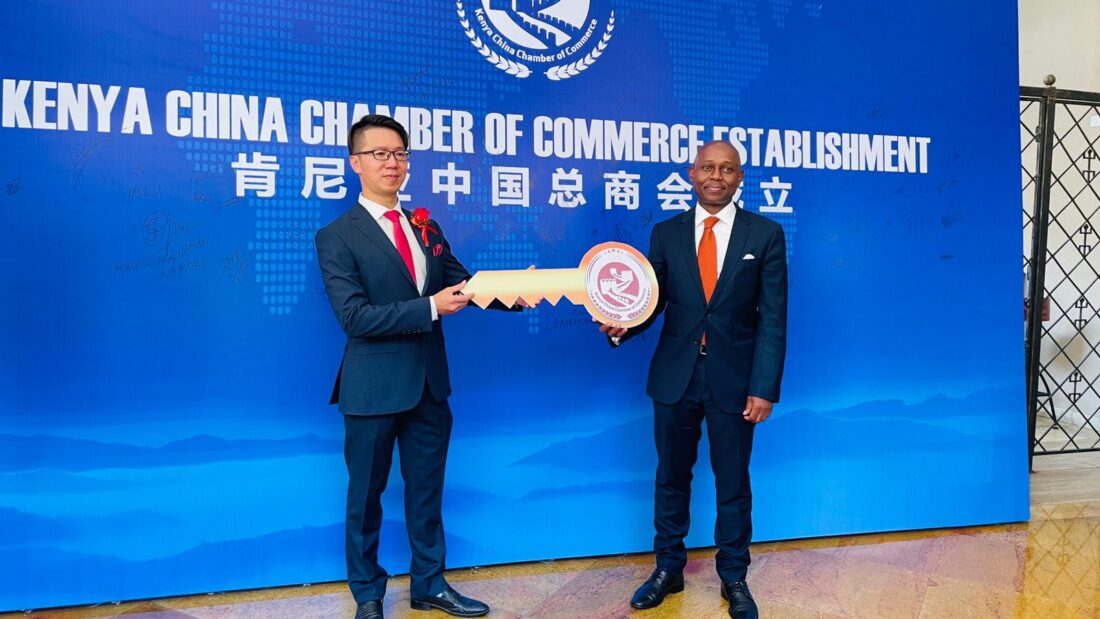 Kenya China Chambers of Commerce (KCCC) has been launched in Nairobi, a business membership organization that will serve as a trade and liaison office between the two countries to strengthen their trade relationship.

This has been achieved through Kenya’s Ministry of Industrialization, Trade and Enterprise in partnership with the Chinese Embassy in Kenya.

Speaking during the event, Tim Chen, the chairman of the KCCC said the establishment will ease trade and eliminate middlemen as well as promote cultural exchange between the two countries.

“The main objective of our organization is to promote friendship and co-operation between the Chinese and Kenyan people including promotion of cultural exchanges between our two countries.   More specifically to strengthen our communities and bind us together, facilitate business cooperation between the two countries, accelerate trade and encourage investment in Kenya to increase local employment,” said Tim.

KCCC is set to open doors for members to network and establish links and relations between Kenyan and Chinese business communities for the mutual benefit of all.

The launch comes at a time when trade between the two countries has been growing.

This comes at a time when China-Africa trade reached Ksh.20.7 trillion from January to September 2021, up 38.2 percent year-on-year and establishing a new record for the period. Chinese Vice Commerce Minister Qian Keming said on November 17.

According to the Kenya National Bureau of Statistics (KNBS), Chinese exports to Kenya stood at Ksh.52.8 billion in 2007 to Ksh.3.8 trillion 2020.

Today, there are more than 400 Chinese businesses operating in Kenya, creating nearly 130,000 jobs for the local people. These companies have played an important role in accelerating advancement of the Big Four Agenda, which is currently Kenya’s development blueprint by President Uhuru Kenyatta.

The two countries plan to hold future events that will establish business links especially in small communities and help in financial and material support.

The partnership is one of the recovery plans from the COVID-19  pandemic and it will also help in Obtaining license permits and business registration through their one-stop center in Kenya.

Key targets for the establishment are the Juakali sector, agribusinesses in Kenya who will see their exports increased to Chinese markets and encourage more tourists in the country.

Besides creating a capacity building for Small Medium Enterprises (SMEs) for a long-term basis, it will aid the youths to tap into and build connections in the ICT and Aviation industry between Kenya and China.

The programme will also enable access to finance and see investors from both countries bank their proceeds in either of the countries for investments.

The involvement of China in business with Kenya has been increasing in recent years and is impacting on Kenya’s economy.