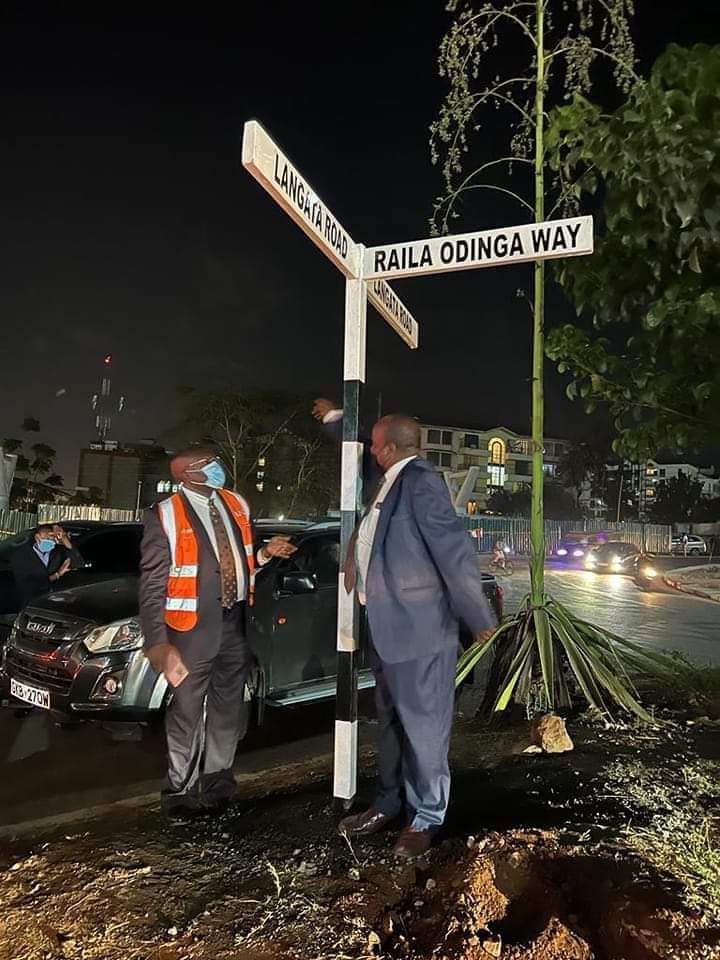 The renaming exercise was through a joint effort between the Nairobi Metropolitan Services (NMS) and Nairobi City County.

Present during the night-long task was the Interior Cabinet Secretary Dr. Fred Matiangi.

The gesture is meant to honour the former premier’s sacrifice and fight for democracy in the country.

On September 20 this year, Makongeni Member of County Assembly (MCA) and Nairobi county assembly minority whip Peter Imwatok tabled a motion to rename Mbagathi Road after Odinga in his contribution to the development and growth of the state.

He cited Raila’s selfless sacrifice in championing good governance, democratic space and the development of infrastructure.

“ We (ODM Nairobi leaders) have been in the streets with him leading from the front. It pains us that people who didn’t do anything to impact society positively are being appreciated more than those who sacrificed more including giving their own live’s from youthful age and happiness for the good of our country,” Imwatok said.

Imwatok’s point of defence was that Raila’s handshakes with both President Uhuru Kenyatta and retired President Mwai Kibaki had led to the restoration of peace and harmony in the country, thus the gesture.

Kenyans, however, had different views.

“Young Kenyans born in 2000s will hate changing of Mbagathi way to Raila Odinga Way because most don’t read and are ignorant. Raila commissioned the construction of Mbagathi Way in 2005. It was constructed using concrete slabs, still going strong with no potholes or cracks 16yrs later,” Abraham Mutai explained.

Nahashon Kimemia, another Kenyan on Twitter was agitated questioning why over-ambitious leaders are being feted with honour at the expense of the ailing economy.

“Why are we honouring thieves in this day and age by having Raila Odinga Way & Francis Atwoli Road? Thinking face These people have achieved nothing except dividing, impoverishing, & stealing from Kenyans. Why are we celebrating our captors, our oppressors, and our thieves in this day & age?”