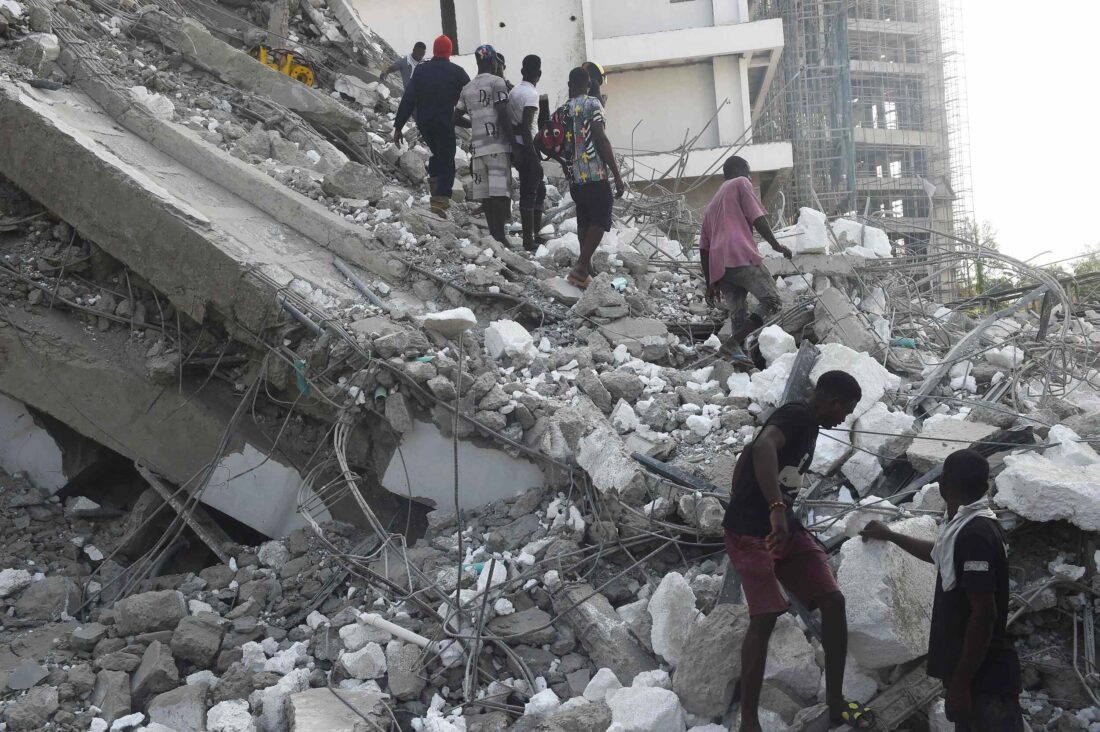 Rescuers are searching for survivors in the wreckage of a 22-storey high-rise block that collapsed under construction in Nigeria’s largest city, Lagos.

At least five people have died and dozens are missing.

Despite heavy rain, rescue workers and locals used floodlights to work through the night, digging through rubble and twisted metal. Four survivors have been pulled from the wreckage.

The partially built block of luxury apartments came down on Monday.

What caused the collapse and how many people are trapped under the debris remains unclear.

Many relatives are now anxiously waiting to hear whether their loved ones have survived.

In the meantime, local authorities have ordered an investigation into the collapse and pledged to make the final report public.
Femi Adesina, a special advisor to President Muhammadu Buhari, said the president “commiserates with families who have lost loved ones”.

He added that the president had urged the authorities to step-up their rescue efforts.

It was part of a complex named 360 Degrees Towers, which was intended to house luxury apartments, town houses and penthouses, according to the development’s website, which has since been taken offline.

The housing scheme is being developed by Fourscore Homes Limited, which has a portfolio of projects in the UK, US, South Africa, and other areas of Nigeria.

Construction worker Eric Tetteh, 41, told the Associated Press that his teams had been waiting for an excavator to arrive at the site when the building suddenly fell.

“Me and my brother, we escaped, but more people are there – more than 100 people,” he said.

A witness who was working in an office building opposite the site told the BBC’s Outside Source programme that he heard a sound, looked out of his window and “saw the building literally going down floor by floor.”

Local authorities have put an emergency rescue plan into place, and local officials have visited the site.

But according to AP, Lagos’ deputy governor Femi Hamzat was met by crowds of angry people who accused authorities of not starting rescue efforts soon enough.

Some reports say the building, which had more than 20 storeys, was several floors higher than originally intended.

Germany to give Ksh.