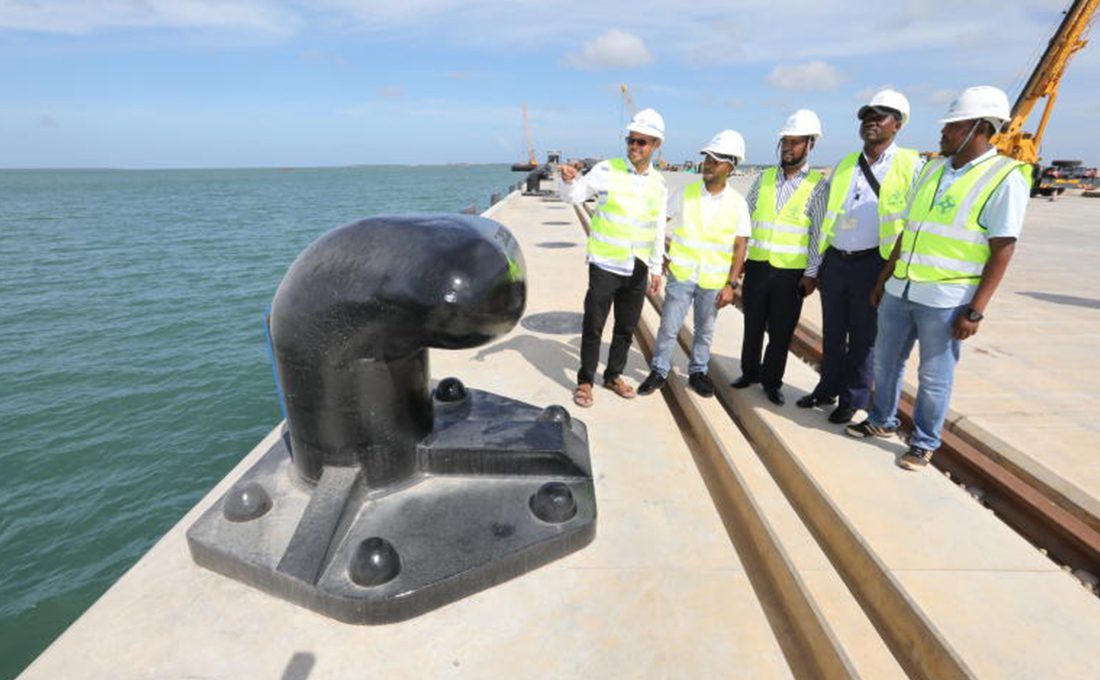 The operationalization of the Lamu Port project is spurring the winds of change in Lamu’s mainland area with a steady surge of investors both local and non-indigenous, taking interest in the county’s burgeoning real estate sector.

Once considered sleepy and backwater areas, Lamu’s Mokowe and Hindi areas are undergoing a transformation, with a steady rise in  commercial and residential rental units popping up around the  towns with a demand to match the housing frenzy morphing these areas that surround the Lamu Port area.

“Toyota Kenya, have already put up a car yard at the Lamu Port link road area and if that doesn’t tell you the emerging real estate trend, nothing else will,” Lamu Chamber of Commerce Chairman, Ikhwan Omar, said, adding that the rush by property developers can barely keep up with the demand for housing units, especially with Kenya Ports Authority (KPA) staff seeking accommodation.

Julius Gachihi’s, simple demeanor though, betrays the figure of a budding property developer, based in Lamu’s mainland area of Hindi, who is benefiting from the influx of people into Lamu seeking jobs at the Port.

He intimates that his key clientele includes  Kenya Ports Authority (KPA) staff from Mombasa, who have been working at the Lamu Port since it was commissioned in May this year, with his bedsitter units housing, as many as three workers   due to lack of affordable good housing.

It is a case of supply not being able to keep up with the existing demand, as some tenants even choose to live inside houses   under construction   as they await the landlords to finish building.

Gachihi is one among a growing class of millionaire real estate developers, whose keen business acumen seven years ago realized that with the operationalization of the Ksh.55 billion Port Project, there would be a massive influx of people seeking jobs at the port and in need of shelter.

“I staked a bet on buying up land on the cheap in 2014 when no one was keen to invest in Hindi area, due to the insecurity fears caused by Al-Shabaab militants that were a threat at the time,” he reveals, adding that he had his eyes set on building rental units.

Today, he feels vindicated with all of his twenty completed rental units fully occupied with two more property developments to be ready later this year.

“I have built these units through grit and sheer will, by selling some land parcels for a handsome profit, in order to develop the properties that I currently have today,” he quips.

He further reveals that seven years ago in 2014 when he decided to start raking up land within the Hindi, an acre of land, one of which he has developed, costed him Ksh.600,000.

Today, the cost of the same acre of land fetches on average Ksh.4,000,0000 according to Tops Investment Holdings Manager, Fabienne Mugo, whose company also deals in land brokerage and property development around Lamu .

A quick survey of land prices in Lamu’s mainland area of Mokowe,  which is the new County Government Administrative Headquarters, reveals that a one acre piece of land that was   Ksh.250,000 some years back , today is at least  Ksh.2.4 million upwards, depending on how close it is to the newly tarmacked township roads.

The Kenya Urban Roads Authority (KURA) has also invested Ksh.1 billion to develop a 15 kilometre township road linked to the Lamu-Witu-Garsen road and with it, the price of surrounding land parcels have also skyrocketed.

“Nobody could have dreamt of investing substantially in real estate within Hindi and Mokowe due to insecurity fears which have since been quelled and now, with the commissioning of the Lamu Port, the tarmacking of the Lamu-Witu- Garsen Road and the improved town infrastructure in terms of water supply and access to both National and County Government services the possibilities seem endless,” Duncan Nyutu, Lamu commercial property magnate observes.

For Nyutu, Lamu County is a realtor and property developer’s dream, as rental properties are likely to fetch prices that rival Nairobi and Mombasa today, amidst the COVID-19 pandemic.

Nyutu, whose specialty surrounds developing properties, both in Amu Island and the Lamu mainland, further illustrates how the port project has stirred a buzz, not only among local investors, but also non-indigenous people who are keenly looking for opportunities to score in acquiring land for properties investment with an eye towards reaping big with the operationalization of the Lamu Port.

“We have investors looking for land to not only set up housing units, but also to build parking yards, petrol stations and garages, that will be needed as the Port operations increase,”Nyutu states.

He, however, notes that a lot of players within the sector are still trying to find their feet, with a lot of land still being held by speculators who are hoping to cash-in in the future rather than develop commercial and housing properties at the moment.

“There is still a bit of reluctance by many land owners to develop property despite the obvious advantages that the Lamu Port project has presented,”Awadh , notes, adding that real estate in the area  Lamu has yet to fully receive the backing of the banking sector, which is crucial for capital injection towards property development.

He states that banks are still reluctant to give out loans to property developers with empty parcels of land  hence the reason why the sector has yet to fully take-off despite the immense potential in real estate.

“There is also the issue of ensuring steady fresh water supply not only in Hindi area, but also in Mokowe, which is the county’s administrative nerve centre, “the real estate developer offers.

Mokowe township’s 3,000 residents have for many years complained over the lack of fresh steady water supply, with shortages rife in the area, leading to the area’s real estate sector growing slowly.

“Land within the Hindi area is much pricier than in Mokowe despite the town  attractiveness as an Administrative Headquarter due to the water supply aspect, whereby Hindi has access to fresh water boreholes managed by Hindi Water Users Association,” Yunus Isa’khia a Mokowe resident notes.

However, Lamu Water and Sewerage Company CEO, Paul Wainaina, reveals that the County Government has already fixed the water situation in Mokowe Township with fresh water supply being piped to houses currently.

“We have fixed the water situation in Mokowe township, not only due to our existing customers but also because of the influx of people coming into Lamu because of the Lamu Port Project who will need fresh water supply in their houses,” Wainaina states.

Of note, the Lamu Port-Southern Sudan Ethiopia Transport (LAPSSET) Authority has plans to construct a Ksh.350 million desalination plant in Lamu’s mainland area of Mokowe and Hindi by next year to enhance water supply in the county, according to LAPSSET Managing Director, Maina Kiondo.

Construction of the desalination plant in Lamu is expected to supply at least 3,000 cubic metres of water daily.

Kiondo further states that the authority is currently carrying out a study of where to locate the plant that will reclaim sea water into drinking water.

“It is of note that the project to build a desalination plant was informed by the LAPSSET Project’s need to have both the resort and port city, with a ready access to clean piped water, which has so far not been realized in Lamu County,” he adds.

According to the LAPSSET Director, the desalination plant would in reality add value to Lamu’s real estate sector, especially in the neighbouring port areas of Mokowe and Hindi, already identified as viable residential and commercial options being the ones that will benefit from the project.

She notes that the influx Kenya Port Authority staff working at the Lamu Port has created a demand for housing, especially in Hindi area.

“A vibrant real estate sector such as the one we are seeing evolve in Mokowe and Hindi area is key to demystifying Lamu’s profile as a red zone area rather than its potential as a viable investment destination,” Myspace Properties CEO, Mwenda Thuranira, intimates.

He added that his Company is among a host of non-indigenous investors looking to invest in Lamu’s burgeoning real estate sector which is taking shape with the Lamu Port Project.

“The turnaround time when it comes to conducting land searches, land transfers and land management issues at the Lamu’s land registry, are efficient and only take a week on average,” Farida Hassan, a property developer based in Mokowe states.

As the owner of a Mokowe based AirBnB named Kieran Layl, she has already begun reaping the rewards of as a real estate investor, by offering housing to visiting Kenya Ports Authority, Kenya National Highway Authority (KENHA) and KEPHRI staff who work regularly within the Lamu.

She states that the Lamu land registry’s reputation for its efficiency coupled with the attractiveness of investing near the Lamu Port project has led to many investors like her, to decide to invest in providing housing options in Mokowe.

Lamu Municipality Chief Officer, Alex Jimbi, on his part, however, notes that a lot of work still needs to be done to ensure that investors adhere to the Lamu County Spatial Plan, in a bid to ensure that there is no infrastructure collapse in future due to overpopulation of certain area, due to the mushrooming of unplanned informal settlements.

“We need to acknowledge that the real estate sectors fortunes are directly tied to how the National and County Government manage the Lamu County Spatial Plan that was developed in 2016 with an aim of ensuring that the county’s resources such as fresh water supply, affordable housing and proper drainage are not stretched,”Jimbi states.

He stated that the County Government is working closely with LAPSSET, to ensure that land management issues surrounding issuance of title deeds, compensation of those affected by project LAPSSET are handled amicably, to avoid the emergence of land injustice cases.

“The County Government together with the National Construction Authority, are working hand in hand to ensure that the property development, whether they are commercial or rental are up to standard,” he added.

Lamu County Commissioner, Irungu Macharia, acknowledges that the growing real estate sector around the Lamu Port area, could not have been possible without improved investment in security.

“The increase in security agents, personnel as well as resources coupled with the National Government’s goodwill towards financing the Lamu Port up to its completion  and operational,  has aided in raising Lamu County’s status, as a viable real estate destination,” Macharia stated.

He further noted that the influx of people in Hindi and Mokowe in search of job opportunities will aid in transforming Lamu’s mainland area, into a real estate darling among potential investors in the near future. 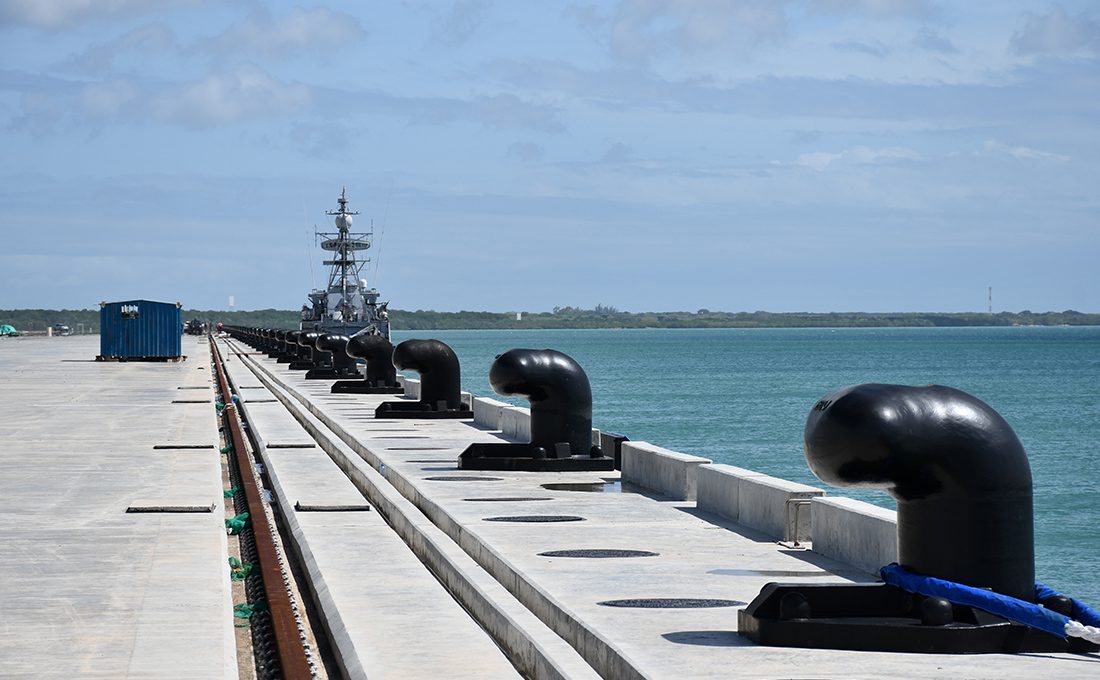