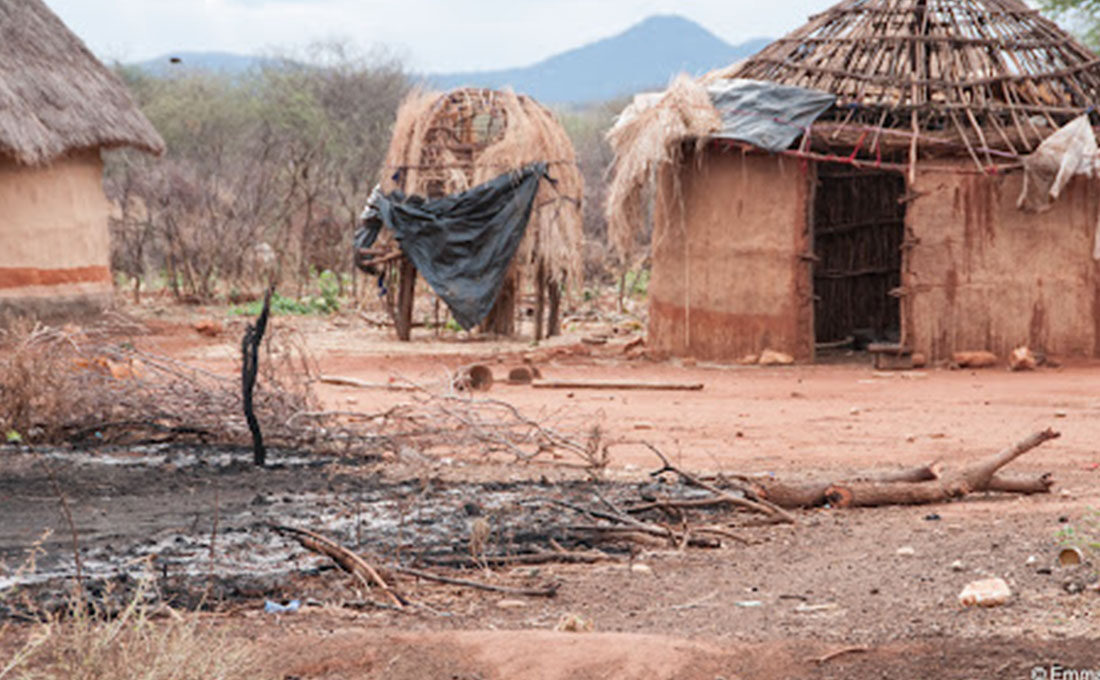 Tension has continued to build up at the restless Ol Moran area in Laikipia County for the fifth day as villagers flee their homes to safer areas for fear of further attacks.

This is after about 50 houses were set ablaze on Saturday night and Sunday morning at the 100 acre land Kisii Ndogo village by suspected armed bandits.

During the Saturday NSAC virtual meeting, it was agreed that the government and security apparatus change tack in it’s approach to insecurity in the county.

Mr Natembeya while addressing residents during the Friday meeting at Ol Moran township asked residents to remain saying that the government was committed to protect them and their properties.

The RC said a “serious” operation will begin to find those responsible for the attacks.

However, by Sunday morning residents were still fleeing their homes to safer areas among them churches and police station.

The residents at Kisii Ndogo village in Ol Moran said that the armed bandits stormed their homes on Saturday evening and started setting houses on fire while demanding that they leave.

Mr Aloise Tumbo another resident said that at his home and the neighbourhood granaries with hundreds of grains were set ablaze.

Mr Tumbo, the chair of the members from the Kisii community living in the area said that over 150 families were living the 100 acre piece of land that they bought years back under a cooperative society, said since they settled the area herders have been accusing them of settling on the land that they used to graze their animals.

Mr Sebastian Maloti, whose family is seeking refuge at the Ol Moran Deliverance Church said that the attackers had vowed to evict them from the area if the government and residents will not provide two men from the Pokot Community who were abducted by unknown people at Ol Moran market last Tuesday.

The Regional Coordinator on Friday denied claims that the government was behind the abduction of the two wanted criminals from the Pokot community.

He asked families with missing relatives to report to the police so that the government can help in finding them.

The abduction of the two wanted men led to the abduction of two business men from the Ol Moran area who were kidnapped while in a market at Churo area in Baringo county.

Unknown people have been sending messages to the families of the two demanding the release of the wanted men in exchange with the two business men.

The recent flare ups witnessed this weekend have led to the killing of at least two people within the Ol Moran area.

A class eight pupil is also nursing gunshot wounds she sustained when armed bandits attacked their Mirango home and sprayed their house with bullets on Friday.

Thousands of animals have also been stolen from the area.

Local leaders have asked the authorities to urgently investigate violence in the county and ensure that law enforcement operations are carried out in the area, and take all reasonable steps to ensure protection for residents.

The leaders have said that the ongoing violence in the county was causing insecurity and forced displacement.

The leaders said that there was high tension in the area.

Ms Lekorere had also accused government security agencies of ignoring intelligence reports given to them by locals and leaders of impending attacks.

Ol Moran area is one of the seven areas and ranches in the county that were last month profiled by the government as dangerous and unsafe.

Other areas that were mapped by the y government last month include the Vast Laikipia Nature Conservancy which is owned by Iconic Conservationist Kuki Gullman in Laikipia West, government-owned ranches; ADC Mutara ranch in Laikipia West and 80,000 – acre Kilmon farm in Laikipia North.

Others are Mugie ranch, Loisaba, Kirimon Nature National Reserve all in Laikipia North.

He said the Government will change tack in its approach to insecurity in the county after various interventions it has deployed so far failed to restore peace.

The PS described the recent killings of residents as the breaking point of the government’s patience.