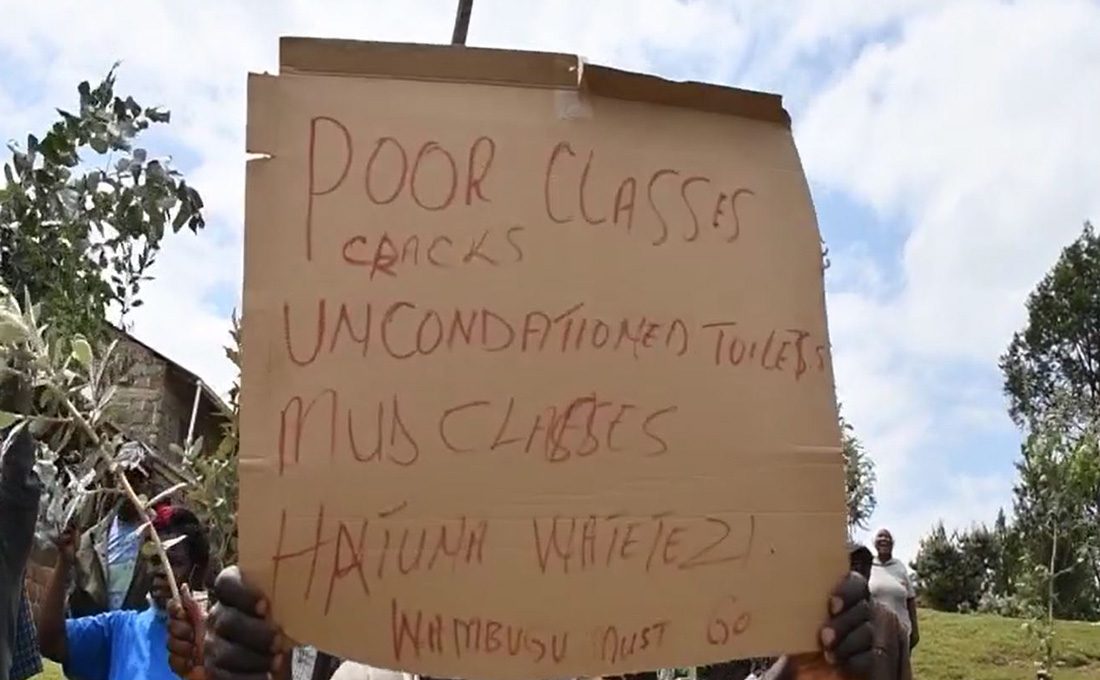 Over 100 parents stormed Milimani Primary School in Gilgil sub-county on Monday afternoon and demanded the transfer of the headmaster and all the teachers.

Teachers have been blamed for ignorance over deterioration of facilities at the school that has continued to operate with filled-up pit latrines thus exposing learners to health hazards.

“We are concerned that mud structures may collapse on our children during the current rainy season. Learners sit on the floor due to the absence of desks while elements of weather torment our children due to gaping walls and leaking roofs,” charged Margaret Wambui, a parent.

They also closed all offices, saying they were against the current administration over the drop in the school’s mean score.

They claimed three teachers often reported to duty drunk, which had contributed to the deteriorating performance.

The parents then held a peaceful demonstration at a nearby trading center and called on area education officers to listen to their grievances.

She claimed that representatives of parents of the school’s Board of Management did not have learners at the institution.

Another parent Esther Wambui Kanyiri alleged that most teachers were chronic absentees while those who turned up reported at their workstations way after 11:00 am.

She said pupils at the school lacked basic amenities such as desks and sanitary facilities.

Mr Justus Mwaura Njenga charged the school’s Board of management had slapped Ksh.500 levy on every learner yet performance had continued to deteriorate.

“We have been concerned with the school’s performance since the past three years. Only 70 learners have been left here after other parents withdrew their children.

Even if the people from the community are not bright as has been claimed by teachers, is it totally impossible to have a few candidates who can register better grades as has happened before?” he asked.

The head teacher, John Ndirangu Wambugu dismissed claims that teachers report to school drunk, saying the school is next to a market.

The school head said he would call for a meeting with the teachers to settle the issue so that learning could resume.

Mr Wambugu alleged that some of the parents who stormed the school are among those who were keen to secure a place on the school’s board of management.

“We had met and discussed the issues facing the school and agreed to work together. Such issues are discussed at the annual general meeting and not through storming school,” he said.The head teacher turned the tables on the parents accusing them of a lack of commitment in their parental obligations, which he said has made it difficult to manage the school.