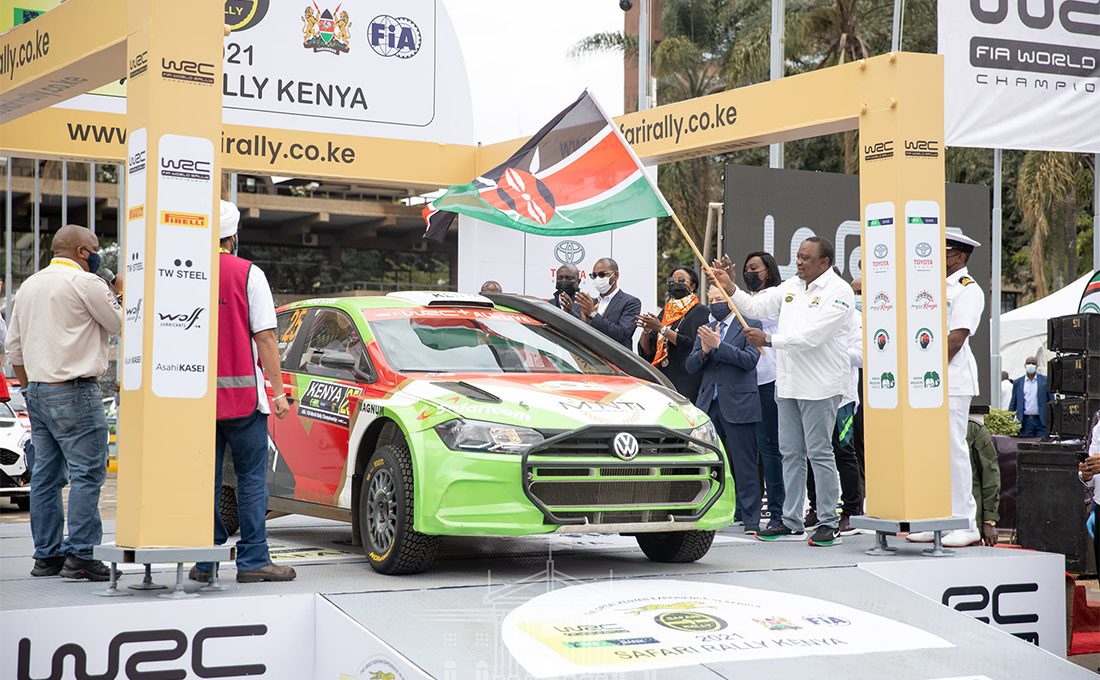 A car driven by State House Chief of Staff Nzioka Waita and his co-driver Tuta Mionki was also among those flagged off at the spectacular event in which 58 teams are participating.

Speaking at the iconic sporting event, President Kenyatta commended the event organizers and all stakeholders for their diligence and hard work that ensured the resumption of the safari rally after a 19-year hiatus.

The Head of State said the Safari Rally holds a special place in the country’s history, saying the event is synonymous with the country’s growth.

“Over the years, the rally maintained its ‘rough and tough’ reputation. It ensured that we tested both our physical limits on the roads, and our innovative strengths in the development of bigger and faster machines,” President Kenyatta said.

He emphasized that it was because of the Safari Rally’s importance to the country’s socio-economic growth that in 2013 he gave a pledge to return the rally back to the country and to its position as one of the International Automobile Federation’s (FIA) and World Rally Championship’s (WRC) toughest rallies.

“This goal has materialized nine years later, into the spectacular event that we are all witnessing today. It has been a pleasure, interacting with the rally drivers and I look forward to witnessing their expertise on the road,” President Kenyatta said.

The initiative, which has so far provided 6,300 helmets to boda boda riders, is aimed at promoting road safety through education and the provision of protective gear to the motorists.

The initiative, which has also attracted international partners such as the International Automobile Federation (FIA) and the Hungarian Motorsport Development Agency (HUMDA), will raise awareness on the adverse impacts of road accidents with the aim of reducing the injuries on the Kenyan roads.

“I am pleased to note that, so far, through this initiative 1,000 young people have received road safety training.  Many other young people from the Boda boda community are set to receive refresher riding skills and road use information,” President Kenyatta said.

He emphasized the need for citizens to always safeguard their personal safety while on the roads even as the Government fulfils its obligations in enhancing road safety.

“Let us be our brother’s keepers and promote safe road user behaviour,” he added.