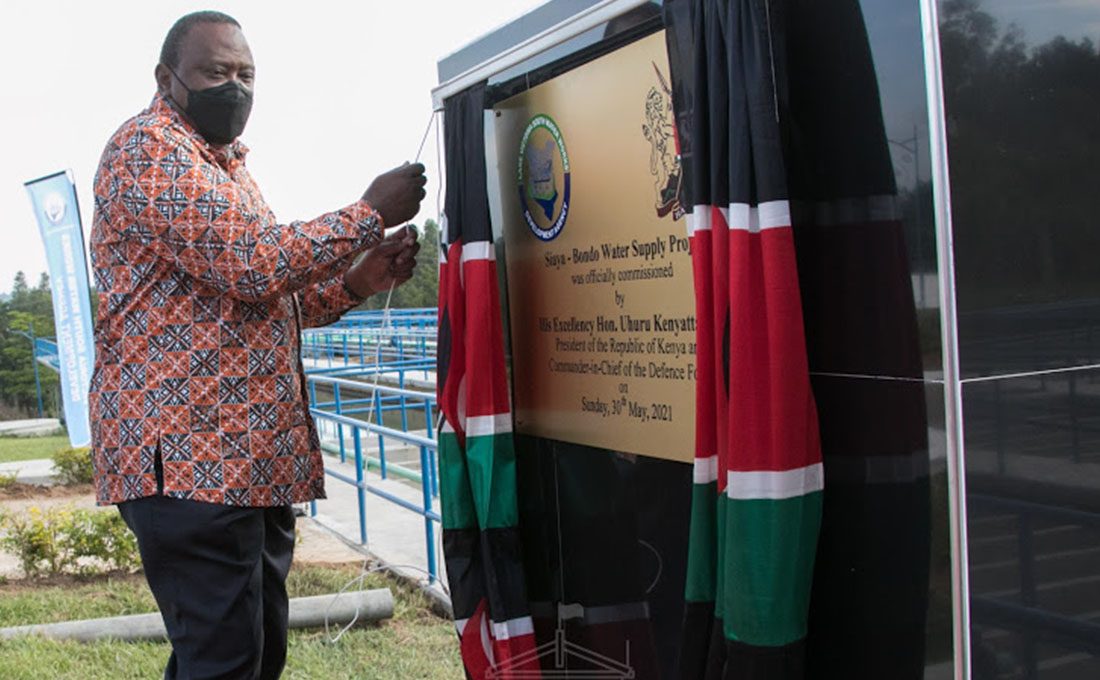 The President, who arrived in the region Sunday afternoon for a three-day working visit, officially opened the Ksh. 1.6 billion Kodiaga-Wagai-Onyirore/Akala, and Nyangweso-Muhanda road circuit, and the Ksh. 2.4 billion Siaya-Bondo water supply and sanitation project.

The road network covers a total distance of 38 kilometres, opening up the fish and sugarcane rich region to markets in Kisumu and beyond.

On the other hand, the Siaya Bondo water project, funded by the Government and the African Development Bank (AfDB), raised the volume of fresh water supply to the two towns by rehabilitating and expanding the Sidindi Malanga processing plant.

The project, whose construction began in November 2013 and ended in December 2018, also involved the construction of sewer treatment facilities in Siaya and Bondo towns.

According to Lake Victoria Water Works Development, the water project implementer, the objective was to improve access, availability and sustainability of water supply and wastewater services in the fast-expanding Siaya and Bondo towns.

Addressing locals at Wagayi trading centre in Gem Constituency, President Kenyatta and former Prime Minister Raila Odinga said the fruits of the handshake are manifest throughout the country as peace and harmony continues to prevail while development projects are rolled out.

“All these projects you are seeing us commissioning are as a result of peace and unity, and I won’t stop appreciating my brother because of the handshake.

The Head of State commended the former PM for being firm and steadfast in his quest to build unity amongst Kenyans saying the handshake was not for the benefit of few individuals but all Kenyans.

“Since the time we said we are going to work together, my brother (Raila Odinga) has been steadfast. We want to continue with this kind of development throughout the country,” the President said.

In Yala, the President said clean water is the basis of good health and pointed out that the project will supply 200,000 households across Siaya County.

“This project will ensure all residents get access to tap water in their homes. When we have water then families will be healthy. Clean water is the foundation of a healthy society,” he said.

Former PM Raila Odinga commended President Kenyatta for his resolve to unite Kenyans, and initiate development projects across the country.

“We thank the Government for implementing various projects in this region. Since we did the handshake, this brother of mine (President Uhuru Kenyatta) has stood firm. He has ensured all that we agreed upon, has been done in Lamu, Mombasa, Athi River, Mandera, Busia as we witness ongoing projects. Be it in Mt. Kenya, Rift Valley and lake region, there is development taking place,” Mr Odinga said.

The two leaders reiterated that the Building Bridges Initiative (BBI) is crucial to laying a firm foundation for peace, unity and tranquility, which will ensure development, and prosperity for all.

“Together we said we are uniting Kenyans to bring development in our nation and that’s why we brought BBI,” the former PM said.

“We are enjoying the fruits of handshake. As the people of Gem we want to thank you for staying on the course of development of the people of Kenya,” Mr. Odhiambo said.

Present during the tour were the Cabinet Secretaries James Macharia (Transport), Sicily Kariuki (Water), and George Magoha (Education) among other senior Government officials.