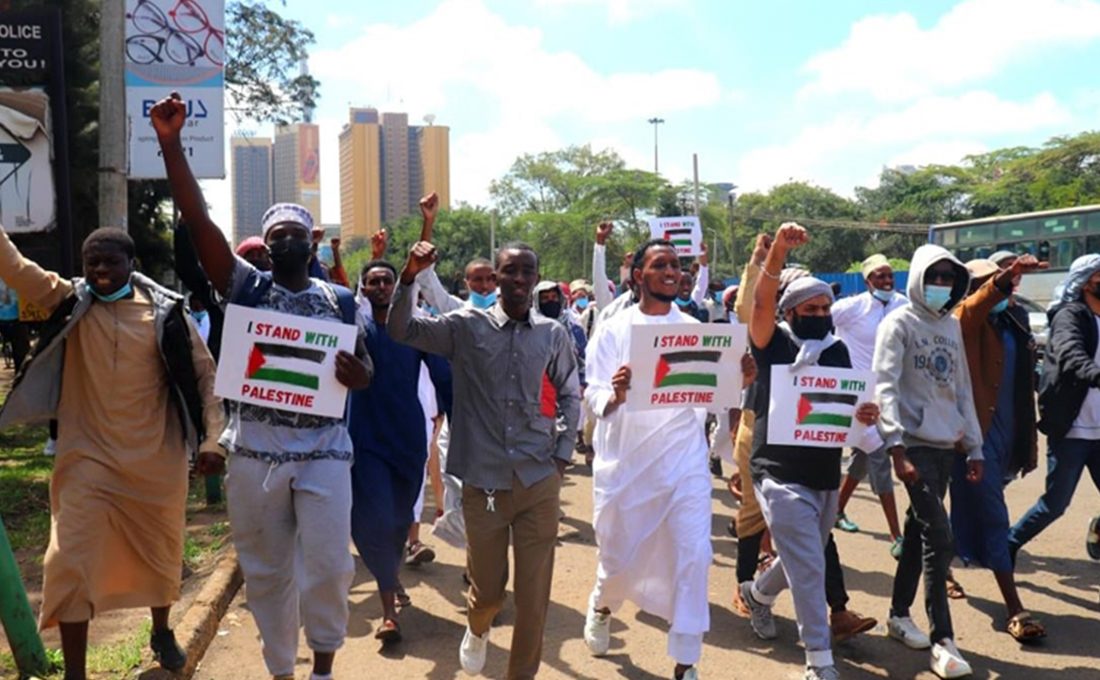 A section of Kenyan Muslims on May 14 marched to the Israeli Embassy in Nairobi waving placards and calling for peace in Gaza and met armed police who dispersed them.

The Israeli military and Palestinian militants in Gaza have been exchanging deadly airstrikes and rocket bombardments, an incident which saw more than 83 people killed, including 17 children and wounding more than 480. This is according to Gaza’s health ministry.

According to the BBC report, Palestinian militants in Gaza fired more than 1, 000 rockets at Israel after its airstrikes killed top commanders and felled another tower block, with Israel responding with airstrikes in Gaza.

The escalation of violence, which began on Monday, triggered street violence in Israel between Jews and Israeli Arabs.

At least 35 Palestinians were wounded in confrontations with the Israeli army in various locations in the occupied West Bank, Al Jazeera reported. The report said the majority of people were hit by live ammunition and that most injuries occurred in the southern West Bank city of Hebron

The United Nations (UN) Secretary-General Antonio Guterres called for de-escalation in the conflict between Israel and Palestine to protect civilian lives.

Fury over the situation fueled fierce protests in the central Israeli city of Lod, where Israeli police reported Wednesday that people were throwing rocks at passing cars and blocking roads into the early hours.

By Friday, six Israelites had been killed in the recent violence, five of them in rocket attacks in addition to a soldier who was killed when an anti-tank guided missile struck his jeep.

Israel occupied East Jerusalem during the 1967 Arab-Israeli war and annexed the city in its entirety in 1980 in a move that has never been recognized by the international community.

The African Union (AU) there should be renewed genuine international efforts to find a lasting solution to the conflict “based on the existence of two States, Israel and Palestine, within the framework of the relevant African Union and United Nations pronouncements.”

Battle to save BBI m