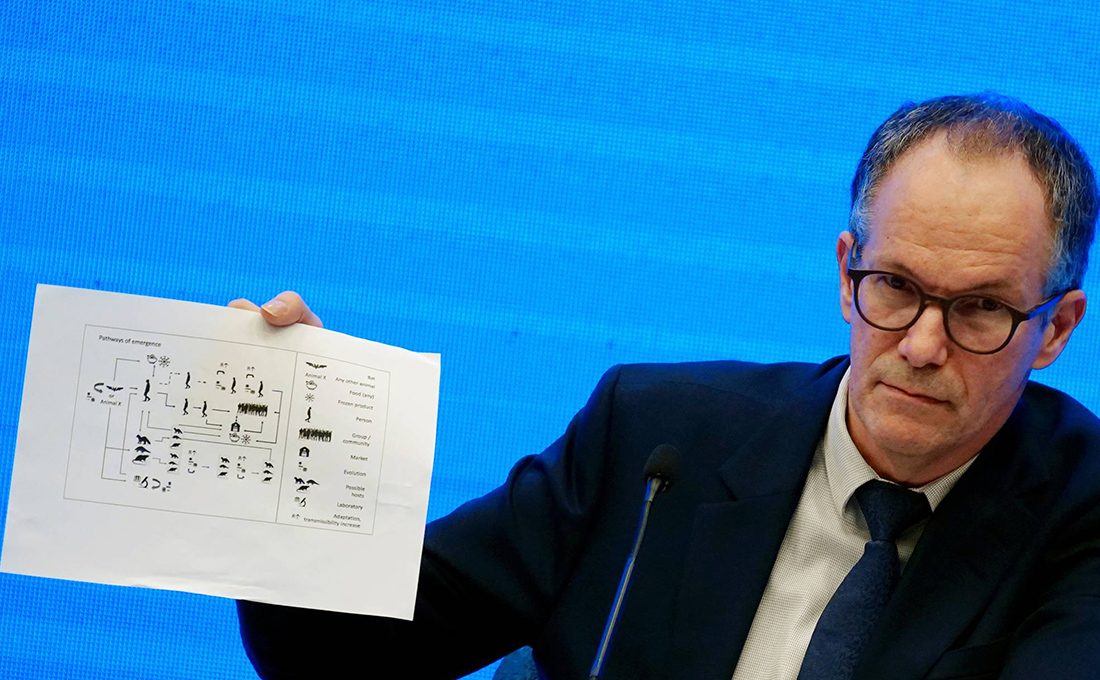 A joint WHO-China study on the origins of COVID-19 says that transmission of the virus from bats to humans through another animal is the most likely scenario and that a lab leak is “extremely unlikely,” according to a draft copy obtained by The Associated Press.

The team proposed further research in every area except the lab leak hypothesis. However, the findings do not come as a surprise, leaving more questions than answers. But the report, whose release has been repeatedly delayed, offers more detail on the reasoning behind the researchers’ conclusions. A World Health Organization official said late last week that he expected it would be ready for release “in the next few days.”

The AP received a near-final copy of the report on Monday from a Geneva-based diplomat from a WHO-member country.  It wasn’t clear whether the report might still be changed prior to release.

The researchers narrowed down to four scenarios in order of likelihood for the emergence of the virus named SARS-CoV-2. Top on the list was transmission through a second animal, which they said was likely to very likely. They evaluated direct spread from bats to humans as likely, and said that spread through “cold-chain” food products was possible but not likely.

According to documented research, bats carry coronaviruses and the closest relative of the virus that causes COVID-19 has been found in bats. However, the report says that “the evolutionary distance between these bat viruses and SARS-CoV-2 is estimated to be several decades, suggesting a missing link.”

The report is based largely on a visit by a WHO team of international experts to Wuhan, the Chinese city where COVID-19 was first detected in late 2019. The team was in Wuhan from mid-January to mid-February.

The WHO expert who led the Wuhan mission, Peter Ben Embarek, said Friday that the report had been finalized and was being fact-checked and translated.

“No firm conclusion therefore about the role of the Huanan market in the origin of the outbreak, or how the infection was introduced into the market, can currently be drawn,” the report said.

The report cited several reasons for all but dismissing the possibility the virus escaped from a lab in Wuhan, a speculative theory that was suggested and promoted by former U.S. President Donald Trump among others.

It said such laboratory accidents are rare and the labs in Wuhan working on coronaviruses and vaccines are well-managed. It also noted that there is no record of viruses closely related to SARS-CoV-2 in any laboratory before December 2019 and that the risk of accidentally growing the virus was extremely low.