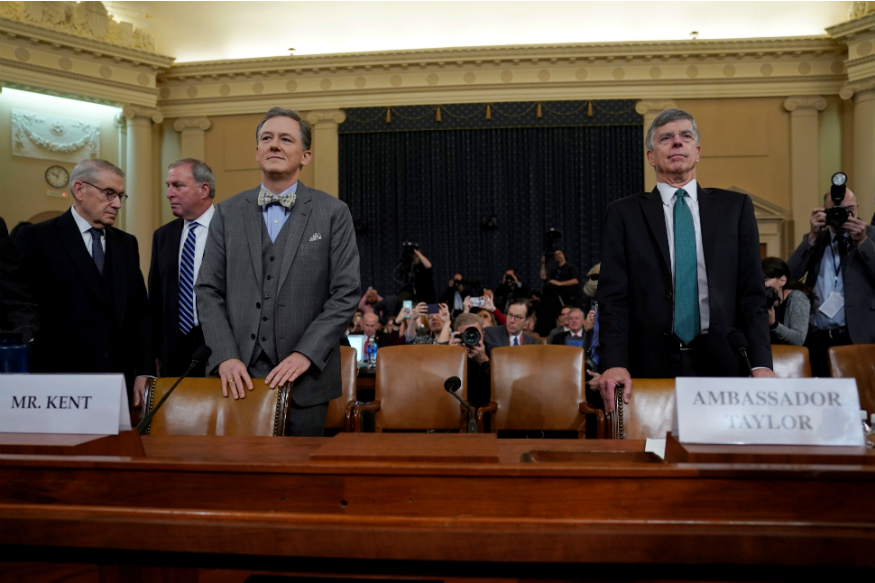 Two top US diplomats delivered gripping testimony Wednesday about Donald Trump’s efforts to get Ukraine to investigate his potential 2020 rival Joe Biden, as the impeachment inquiry into the president shifted into a new phase of high-stakes televised hearings.

William Taylor, the top US diplomat in Ukraine, began his testimony before the House Intelligence Committee with a new revelation about Trump’s efforts to pressure Kiev the main issue of just the fourth impeachment process in US history.

Taylor testified that he was told Trump cared more about the probe than he did about Ukraine.

The key evidence is the official White House transcript of a July 25 telephone call between Trump and Zelensky in which the US president asked his Ukrainian counterpart to investigate the Bidens.

Trump dismissed the probe in the Democratic-led House of Representatives as a “witch hunt” and said he was “too busy” to watch the first public hearings, during which he received staunch backing from Republican lawmakers.

Democrats accuse Trump of abusing his power by using US military assistance and a possible white house meeting to pressure President Volodymyr Zelensky into opening a probe into the Democrat Biden and his son Hunter, who served on the Board of Ukrainian gas company Burisma.

If the house impeaches Trump, it would then go to trial in the Senate, where Republicans enjoy a 53-47 majority.

The next hearing is scheduled for Friday, featuring the US ambassador to Ukraine who Kent said was recalled by Trump after being subjected to a “smear campaign” by Giuliani. Eight more witnesses are to appear next week, the second of several planned weeks of hearings.