Tax appeals tribunal given 3 months to give its progress report 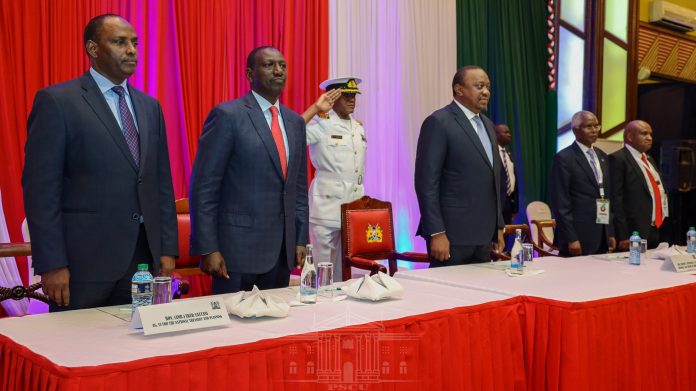 President Uhuru Kenyatta has challenged the judiciary to expedite tax disputes before it in the fastest time possible.

In a tough-talking speech during this year’s taxpayers’ awards, the president further directed the tax appeals tribunal to provide him with a report within the next ninety days on what the tribunal has done to expedite the tax dispute cases before it.

Here, President Uhuru Kenyatta, who was the chief guest at the event, took the opportunity to call upon the judiciary to pull its weight in expediting tax disputes, which are now holding back the collection of hundreds of billions of shillings in tax revenue.

His call coming a day after Chief Justice David Maraga decried the lack of budgetary support from the executive.

President Kenyatta said that over 1000 legal cases with disputed tax worth over 300 billion shillings are awaiting hearing and determination. Majority of which have been waiting for over two years and he was calling upon the judiciary if they so wish to expedite these cases without fear or favor.

The president has also issued an ultimatum to the tax appeals tribunal and the Kenya Revenue Authority to speed up the resolution of tax disputes and said that the government had a new tax tribunal and he now wants a report from within 3 months on what KRA had done.

President Kenyatta has also directed the National Treasury to review its whistleblowers’ system in order to encourage actionable information on tax evaders from members of the public.

The president’s ultimatums comes at a time when the national treasury is effecting budget cuts across the board in a bid to close the widening gap between public expenditure and tax revenue collections.

Kenya’s budget deficit stood at 7.7% of Kenya’s gross domestic product in the 2018/2019 fiscal year, against the targeted 6.8% a figure that points to why the KRA is now under growing pressure to grow the country’s tax revenue