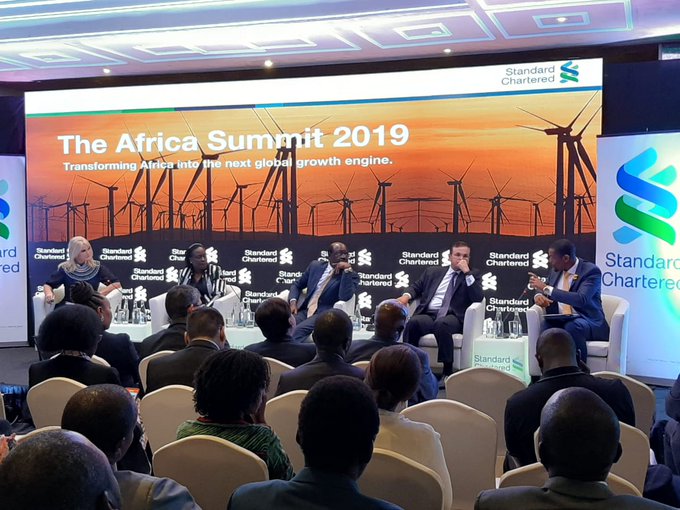 Africa has the potential to be the next growth frontier in the global economy.

This was the rallying call during the Standard Chartered’s Africa summit 2019 which was held under the theme “transforming Africa into a global growth engine”.

According to standard chartered bank’s latest global economic outlook report, global economic growth currently stands at 3% with only three of the g20 countries India, China and Indonesia growing at a rate higher than the global average.

Africa is said to be contributing only 1% to this global economic growth.

Experts however argue that this scenario could soon change if the continent puts its best foot forward in the midst of the prevailing global economic slowdown.

Razia khan Said that this may well be the first time when we see a more pronounced global economic slowdown that isn’t really being reflected in any meaningful way in sub-Saharan Africa. When it comes to the key economies, we certainly see enough in place to be able to withstand those immediate pressures provided that we do not see a very pronounced global slowdown.

But for the continent to achieve the kind of growth that is needed to drive global economic growth, the secretary general of the un conference on trade and development Dr. Mukhisa Kituyi says that Africa needs to leverage on the data economy through growing value  and monetization of data to spur economic growth and balance cooperation across borders.

Mukhisa kituyi  said that in 2000 globally, IP traffic was 200 gb per second. 2018 it had reached 45000 gb per second and with the onset of 5g we are expecting 2023 it will be 150000 gb per second. This phenomenal explosion of the data economy has 2 major characteristics. First the growing value of data as the driver of economic activity. Second the growing concentration and consolidation of control of data by platform giants.

In an apparent reference to last week’s xenophobic attacks on foreigners in South Africa, the UNCTAD boss said Africa will not achieve much without cooperation and better trade relations within African countries.

Mukhisa Kituyi also said that in South Africa the Minister Of Finance published a new policy for made in SA raising the barrier of intra African trade into SA but the rationale was lets build SA jobs like SA exports to the rest of Africa. There is no free lunch for SA in Africa.

Economic experts at the Africa summit 2019 however said Africa would need to achieve strong growth of about 7% or higher over several decades, if economic growth on the continent is to be transformative.

It is only then that Africa will be the engine of economic growth globally.