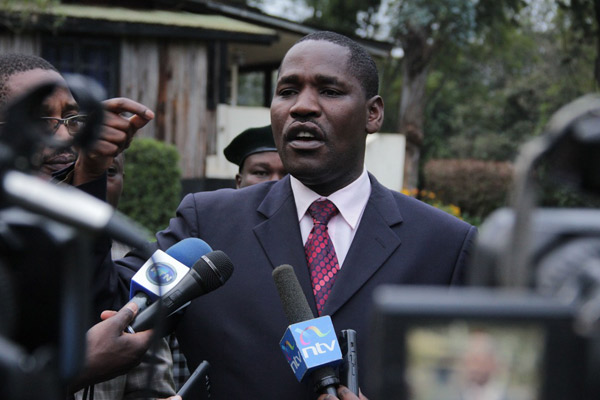 The controversial edible oil that was impounded by the government has not been released as earlier claimed by CS Trade Peter Munya.

According to Kenya Bureau of Statistics (KEBS), none of the 500 controversial consignment worth Ksh.10 billion has been released by the government, bringing about a brawl within the government itself.

KEBS statement contradicts Trade CS Peter Munya’s earlier revelation that 58 had been discharged to the importers, even as questions hang around the clearance to import unfortified edible oil against the country’s standards.

Fortification requirements are incorporated in Kenya Standards pursuant to a regulation by Ministry of Health to add one or more vitamin and, or mineral to a food.

The government impounded Sh10 billion worth of edible oil last year, raising questions on why the affected importers were cleared in the first place to bring in the commodity.

Munya on August 14 said the decision to release part of the consignment was reached by a multi-agency team, including the Director of Criminal Investigations (DCI).

“58 containers have so far been released. It is not is not harmful to the public,” Munya told journalists in Nairobi.

Kebs however denounced the CS yesterday saying “none” has been released to the owners.

“As required by Kenya Standards, it is not supposed to be sold in the local market unless a exemption of that requirement is given as provided under the law,” Kebs

“When they were randomly tested they were found not to meet the requirements of Vitamin A as specified in KS: EAS 769:2012 Kenya Standard – specification for fortified edible oils,” the standards body said.

On August 30, Parliament stopped the release of edible oils confiscated by a Government multi-agency task force, a year ago, in Mombasa and directed re-testing for vitamin A.

The National Assembly Trade, Industry and Cooperatives Committee said the imported oils should be retested to confirm whether they are fit for human consumption.

The committee said it swung into action after reports that 47 out of the 503 containers of oils had been released to importers following a Government waiver.

Committee Chairman Kanini Kega (Kieni) who led committee members on a tour of container freight stations (CFS) wondered what led to change of heart, a year after the products were impounded.

“We have (stopped) the release of containers of edible oils to allow for retesting for vitamin A. We are giving Kebs another chance to retest the oils and give a report. If we are not satisfied, we will order an independent test,” Mr Kega said.

He had reiterated that retesting would be fast-tracked and Kenyans were to know the outcome in the next 14 days, only for the Trade CS to bring about a controversy over the release on the consignment.